Engineers in the art of precision

Stories of reconstruction, revival and renewal

Cleaning and restoring a ‘clock watch’ movement is a challenging task – and in this instance, once we had opened up the watch, we carefully removed all levers and springs in order to make necessary repairs. This kind of watch is ‘complicated’ and can be operated on demand or strike by itself - the hours and double hit for quarters. This would be repeated on every hour and quarter throughout the day. There are also two switches; one is to turn it to silent and the other is for the petite sonnerie setting which will still strike on each quarter - but this time, omit the hours. There are 19 lever springs, five racks, nine rotating levers, 22 various levers, seven lever stops and 38 screws.

All levers and springs have been removed, ready for cleaning.

These comprise all the clock watch mechanism parts.

Under the three-quarter plate are parts for the going train and the clock watch train, with hammers.

The  lowest levers and springs are installed, ready for the next section to go over the top.

The hour rack has 12 teeth, and sits on a round wheel with trigger effect. When released, this trigger (or lever) is held away from the ratchet teeth and allows racks to release. These will only rotate as far as the given hour would allow.

The minute cam has four arms. Each arm has a miniature step to spiral down to the base in 14 steps, to represent each minute or each quarter. You can also see four arms cross at the base of the minute cam, which will push the lever over on each quarter. The minute wheel has a stop underneath to prevent the quarters from working at the 12 o’clock position only.

This has 14 teeth and will lift via the finger piece against the given minute. Once lifted, this will connect the hammers and strike the gongs.

On this image, there are two sets of pointed teeth which represent each quarter.  They will be lifted at split-second intervals to sound out a double hit with different-sounding tone, because both hammers are used.

This lever sets the clock watch sonnerie setting from full to petite setting.

The lever is in the correct place in the mechanism.

Now you can see and hear the clock watch strike by itself.

This is an image of the balance wheel with double overcoil, probably made by Houriet. It is used on high-quality watches, and is designed in a spherical shape to produce force, which is distributed closest to the theatrical ideal. 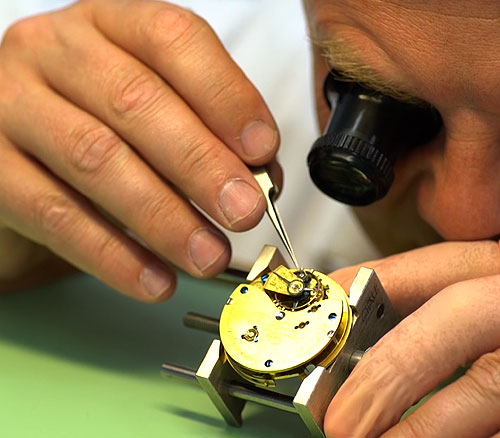 ALL WATCHES REQUIRE A BALANCE STAFF 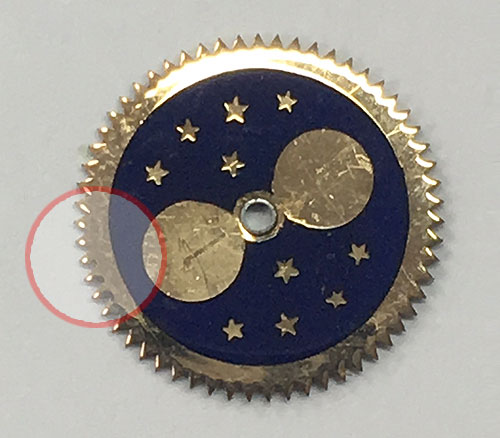 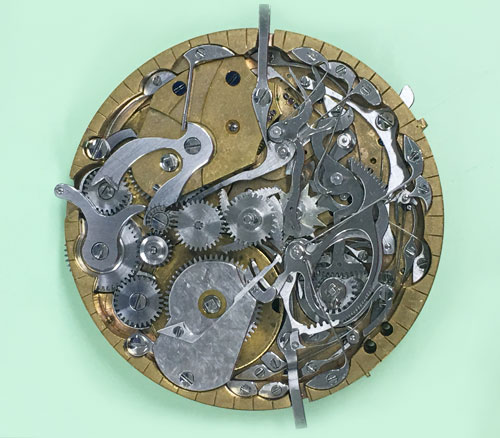 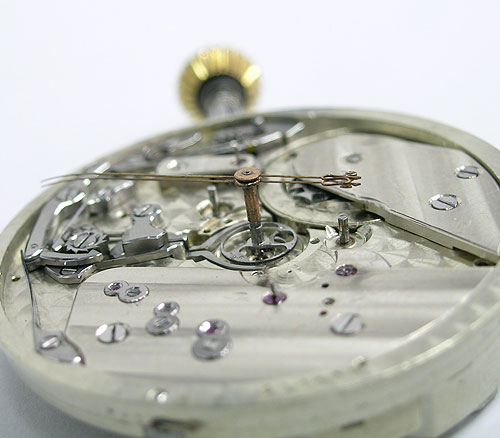 "My great grand-father's Breguet was given to me by my father for my 21st birthday. 30 years later, post restoration by SHWR, it is in far better shape than I have ever seen it. SHWR's craftsmanship is immaculate. The firm is polite, professional and honest. Outstanding - I cannot recall another occasion when I have been so favourably impressed."

"I have just had my 1934 Rolex Oyster repaired. From start to finish I had full confidence in every one I had contact with at Steven Hale. They have been very efficient in identifying the problems at the initial examination and dealing with them as promised. There were no nasty surprises and unexpected complications along the way. Because of the age of my watch, spares are not available, and new parts have had to be made - all very expertly done. They even polished the gold case and my 86yr old watch now looks as good as new. You can certainly trust these people with your precious timepieces."

"Fantastic job repairing a family heirloom pocket watch which will now return home to Namibia.
The service was superb with detailed repair and service quote. Communication throughout was equally great leaving you with the confidence that you watch is in the best possible hands."

"I had bought a 1970s Pepsi GMT at auction and it needed some work. The lume on the hands was breaking up. Rolex UK wanted some hilarious price and threatened to replace the hands with new ones if their work failed - all at my expense of course. Steven Hale and co managed to repair the hands and maintain the original patina of the 40 plus year old watch which was of course crucial! Highly recommended."

"These are watch lovers and it shows. Their meticulous craftsmanship and expertise make them unique in London and I suspect that only in Switzerland may their equivalents be found. The experience of Steven Hale Watch Restoration begins with the talented and charming individuals who are client facing in South Molton Street and who instil a confidence that is consequently fully fulfilled. This firm represents unequalled talent in its field as well as exceptional client service. I have seldom recommended anyone with greater conviction."